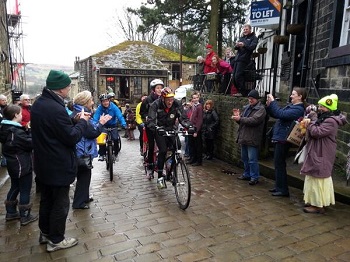 The tandem cycle ride follows the route of the Grand Depart of the Tour de France (which visits the Yorkshire Dales and Bronte Country regions in July 2014), and has been organised to raise money for Sport Relief.

Harry and Amy arrived in Haworth in the late afternoon, cycling up the setts of the village's famous main street where they were greeted by local schoolchildren, residents and tourists - as well as Dodgy Rodge (Bronte Country's very own 1940s style "spiv extraordinaire").

The TV presenters are collecting donations as they cycle along the Grand Depart route but you can also donate online via the BBC Tandem ride page on JustGiving at http://www.justgiving.com/tandemtour