The Bronte Birthplace gets a blue plaque - at last! 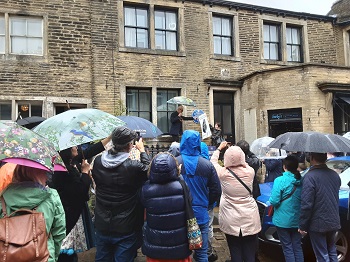 At a special ceremony held in pouring rain outside the Bronte Birthplace in Thornton on 30th July 2021 a blue plaque was unveiled to commemorate the birth of the Bronte sisters Charlotte, Emily and Anne along with their brother Branwell in 1816, 1818, 1820 and 1817 respectively. [More specifically, the day chosen was actually the 203rd anniversary of Emily's birth, the Wuthering Heights author having been born there on 30th July 2018.] 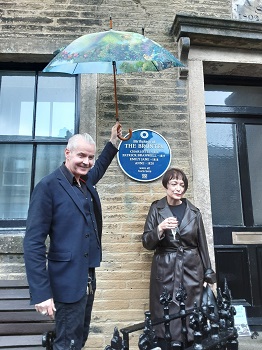 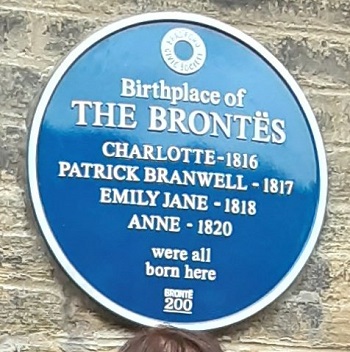 Undeterred by the inclement weather a large crowd turned up to watch the author and creator of the Bronte Stones project Michael Stewart and Ann Dinsdale of the Bronte Society unveil the new plaque, which was commissioned by Mark and Michelle De Luca in association with the Bradford Civic Society along with financial support from locally based supermarket chain Morrisons'.

For many years a black metal plaque was the main (and for some time only) visible indicator of the building's significance, but the new blue version is in keeping with the contemporary format for marking birthplaces of famous authors and historical locations throughout Britain. At long last the Bronte Birthplace has finally got its blue plaque, and few would argue that the honour is not well overdue!

The unveiling at the Bronte Birthplace was followed by the launch of Michael Stewart's new book "Walking the Invisible" in the newly re-landscaped garden at the nearby South Square with live music, readings, a book signing, street food and a fully licenced bar.

There's an excellent video of the event from "Bradford through the Lens" on YouTube here: