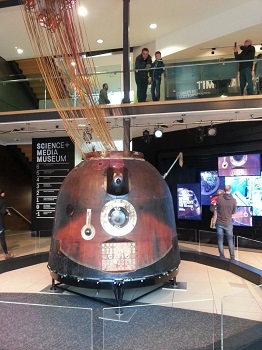 In September 2017 a historic piece of space hardware came to "land" in the foyer of the National Science and Media Museum in Bradford.

The Soyuz TMA-19M descent capsule which was used to return British astronaut Tim Peake safely to earth in 2016 was put on display to the general public as part of a temporary exhibition which also includes a "virtual reality" immersive film of the journey.

Tim returned to earth in the spacecraft along with American astronaut Tim Kopra and Russian cosmonaut Yuri Malenchenko in 2016 having spent six months orbiting the earth on the International Space Station. The capsule, which shows signs of the inevitable damage caused by the heat of re-entry, has been displayed along with the massive parachute (apparently the size of two tennis courts) which was used to slow its final descent through the earth's atmosphere and its crash landing on the Kazakh steppe in Kazakhstan.