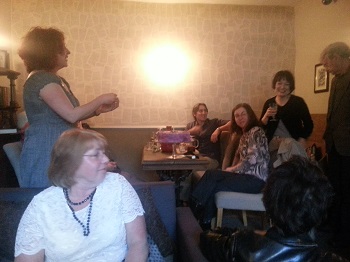 The Bronte Society has unveiled its plans for next year's (2016) bicentenary of the birth of Charlotte Bronte at a special launch party (pictured above) held appropriately at the Bronte Birthplace in Thornton.

Attendees at the event, which was held on 21st April 2015 (the 199th anniversary of Charlotte's birth), heard how the Bronte Society intends to "bring the Brontes to the world and the world to Yorkshire" through a series of events, exhibitions and partnership projects under a general "Bronte 200" bicentenary theme.

Working as a creative partner during 2016 will be Tracy Chevalier, world-renowned author of "Girl With a Pearl Earring", "Remarkable Creatures" and "The Last Runaway". Tracy is developing a number of projects supported by Arts Council England, including a special exhibition at the Bronte Parsonage which will contrast the smallness of Charlotte’s world with the greatness of her ambition and achievements. The exhibition, named "I Shall Go Off Like a Bombshell", is scheduled to open at the museum in February 2016.

Tracy is also editing a collection of short stories influenced by the writing of Charlotte Brontë entitled "Reader, I Married Him", which will be published in the spring of 2016.

Tracy said: "I have long loved Charlotte Brontë and am thrilled to be involved in the upcoming celebration of her bicentenary. The Parsonage is a unique house; it’s incredible to see the place where so much creativity arose. I’m hoping to sprinkle some surprises in amongst the dresses and writing desks – including a Twitter tour of the house and exhibition, and even a knitted Jane Eyre !"

Also being announced is "Celebrating Charlotte", a touring exhibition which will be shown at the National Portrait Gallery in London before crossing the Atlantic to the Morgan Library and Museum in New York. The Society is also launching a "Seeking Charlotte" social media campaign using the hashtag "#seekingcharlotte" on Twitter.

Marketing Officer Rebecca Yorke explained: "We often have visitors to the Museum who tell us that they were named after one of the Brontë sisters, so we thought it would be fascinating to find women of all ages called Charlotte who share her birthday. We are asking Charlottes born on or near 21st April to contact us by email to seekingcharlotte@bronte.org.uk so that we can invite them to share our celebrations in 2016."

Matthew Withey, Chair of the Bronte Society Bicentenary Committee, said: "The bicentenaries of the Brontë siblings provide a tremendous opportunity for the Brontë Society to celebrate the legacy of the Brontës across the globe. We recognise that arts organisations, museums and individuals will want to help us mark these special anniversaries and look forward to building new partnerships and reaching new audiences during the five-year programme."

Meanwhile Bonnie Greer, President of the Bronte Society, is developing a number of personal projects aimed at growing and diversifying the membership during the bicentenary period. These include "BSide" - a programme aimed at engaging young women with the work of the Society which gets off to a start with a "Jane Eyre" fanfiction workshop in London.

Bonnie is also developing an award named after Patrick Bronte and an initiative with Bradford Council that will commemorate Branwell Bronte.  and has also made a short film with Ann Dinsdale, Collections Manager at the Bronte Parsonage, inviting people to come to Haworth during the bicentenary celebrations.

Encouraging visitors to come to the Bronte Country area is of course seen to be an important aim of the initiative, and it is crucial that the relevant stakeholders cooperate for mutual benefit and to ensure its success. Having long established associations with the Bronte Birthplace in its capacity as publisher of the Bronte Country website (which has been promoting the Bronte Country area since 1997 and will be celebrating its own 20th anniversary in just under two years' time), Bradford based Internet marketing consultancy Eagle Intermedia Publishing Ltd. is supporting the Bronte bicentenary by raising awareness of the new initiative through online marketing, and looks forward to working alongside participating organisations for the general benefit of business and the local community.

[News item (based on information supplied by the Brontë Society) posted by Eagle Intermedia April 2015.]