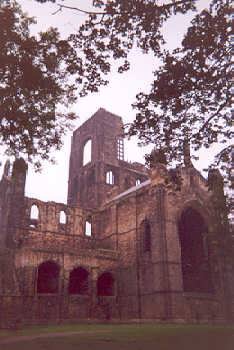 Founded in 1152 by monks from Fountains Abbey near Ripon, Kirkstall Abbey is a ruined Cistercian abbey on the banks of the River Aire just outside the city of Leeds.

The abbey is known to have been visited by Patrick Bronte, and it is believed that this is where he proposed to Maria Branwell. The couple were married nearby at the church in Guiseley.

Adjacent to the abbey is the Abbey House Museum, which contains historic artifacts as well as an indoor recreation of a Victorian street, complete with facsimile shops and even a pub !