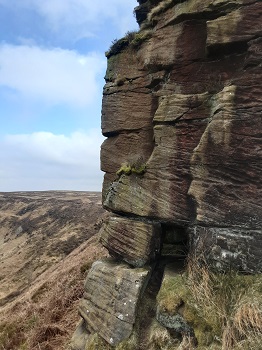 The location was known to the Brontes, and is believed that Ponden Kirk served as the inspiration for Penistone Crag in Emily Bronte's Wuthering Heights.

A cleft in the rock can be clambered through, and some maintain that this may be the "Fairy Cave" as referred to in the novel. [N.B. Another possible candidate for the inspiration of the "Fairy Cave" is Yordas' Cave near Ingleton; being an actual cave (rather than just a hole in a rock) this might seem a more plausible contender..]