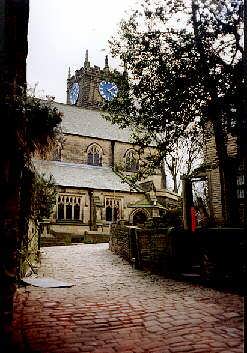 St Michael's and All Angels' Church is at the very heart of Haworth village. Patrick Bronte took up a position here in 1815, and it was while living at the adjacent parsonage that his daughters, Charlotte, Emily and Anne wrote their novels. Also adjacent to the church is the Old School Room, which was built win 1832 while Patrick Bronte was incumbent, and where Charlotte Bronte taught.

Although the main part of the church was demolished and rebuilt under Reverend John Wade after the time of the Brontes, much of the church tower remains basically unchanged since their day.

Several members of the Bronte family were buried in the crypt of the church, while the celebrated pioneer parachutist Lily Cove is buried in the graveyard outside.