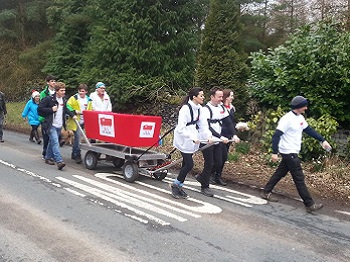 About four years and a week to the day after their famous charity tandem ride through Haworth the Saturday 24th March 2018 saw BBC Look North TV presenters Harry Gration and Amy Garcia return to Bronte Country once again to raise more money for Sport Relief.

This time joined by Paul "the Weatherman" Hudson and hauling a big red sofa as part of an epic journey through fifty "stopping off" points (hence the "Big 50" challenge) in various parts of Yorkshire the trek through Bronte Country had originally been planned for the previous Sunday, but had to be rescheduled due to snow which fell in the area on that particular morning.

Going ahead as planned this time the sofa parade started out from the centre of the city of Bradford passing through Sandy Lane and Wilsden then along the Great Northern Railway Trail across the Hewenden Viaduct to Cullingworth, and over the moors to Haworth.

The team were collecting their charity donations as they lugged their sofa along the route but you can also donate online via the BBC Sofa Challenge page on the Sport Relief website at https://my.sportrelief.com/sponsor/sofa