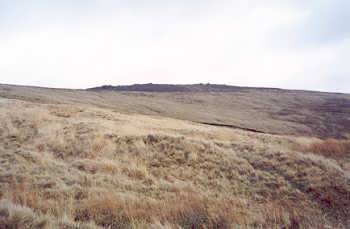 Blackstone Edge is a bleak rocky outcrop overlooking Hollingworth Lake and the Lancashire towns of Rochdale and Littleborough to the north east of the Manchester conurbation.

The A58 passes close by, en route from Halifax and Sowerby Bridge in West Yorkshire's Bronte Country .

There is also an ancient pack horse road here (marked on some maps as being a Roman Road) - and in times of antiquity this was probably one of the main routes crossing from east to west across the Pennine Hills.

Today Blackstone Edge is more well known as a landmark on the Pennine Way long distance footpath, which passes along the top of the outcrop en route from Edale in the Derbyshire Peak District to Kirk Yetholm in Scotland, a trek of about 250 miles.