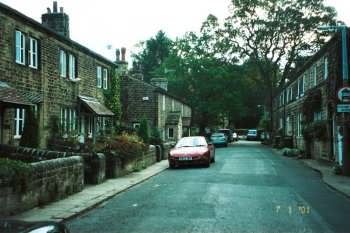 Esholt is a small village in the Aire Valley, just outside Bradford and near Shipley, Baildon and Guiseley in West Yorkshire's Bronte Country .

Esholt is most famous for having been used for some of the exterior location filming of Yorkshire TV's popular soap opera "Emmerdale Farm" (now known simply as "Emmerdale") - even though the fictional village is actually set in the far more rural Yorkshire Dales region further to the north.

Although the village is no longer used for filming (the crew having now moved to a purpose built set on the Harewood Estate near Harrogate), Esholt is still popular with Emmerdale fans who are visiting West Yorkshire's Bronte Country and who want to see the pub formerly used as the Woolpack Inn, and other buildings associated with the series.

Nearby attractions include Saltaire (built by the Victorian philanthropist Sir Titus Salt) adjacent to the town of Shipley (just outside Bradford).