Petition launched to save Queensbury Tunnel 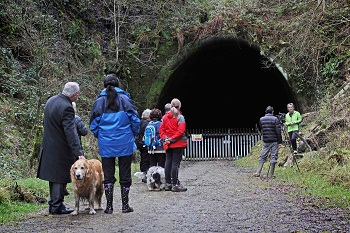 The above photograph appears by courtesy of Norah McWilliam

A local group of residents have banded together to launch a campaign to save the Queensbury Tunnel, and convert it in to a cycle path to connect with the existing Great Northern Railway Trail in the heart of West Yorkshire's Bronte Country.

Queensbury Tunnel is a mile-and-a-half long disused railway tunnel which lies broadly on the old rail routes between Halifax and Bradford and Keighley. The sustainable transport organisation Sustrans has a long-standing aspiration to create a connection between the Aire and Calder valleys along which it is already developing cycle paths, but the hill Queensbury stands on acts as a substantial barrier to the overall goal being realised. Whilst the tunnel has long been recognised as a possible route for an Aire-Calder connection, its generally poor condition has previously ruled this out.

However, with plans apparently now afoot to block the tunnel permanently a campaign has now been launched to save it, and to convert it in to what would be one of the longest underground cycle paths in Europe.

Says Norah McWilliam (one of the group's coordinators): "The Queensbury Tunnel could be a wonderful asset for commuters between Bradford and Halifax - and would be a huge attraction for leisure cyclists and walkers in Yorkshire."

On saving the tunnel, Norah continues: "It's a big challenge - not least to sort out the flooding by removing infill at the Southern Portal. Several shafts need urgent repairs to protect properties at ground level above. We're asking the Highways Agency to do this in a way that maintains the passageway through."

As part of the campaign an online petition has been set up at http://epetitions.direct.gov.uk/petitions/59903, and it is hoped that the tunnel can be saved for use by current and future generations.

You can also visit the Queensbury Tunnel group's Facebook page at https://www.facebook.com/queensburytunnel