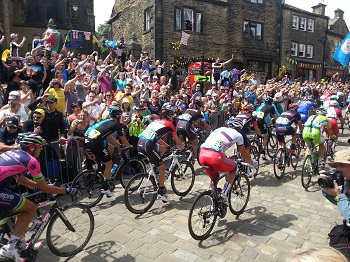 On Sunday 6th July 2014 the Tour de France came to the Bronte Country area of West Yorkshire as part of Day Two of the "Grand Depart" (which launches the world's biggest cycle race and often takes place outside of France itself).

Starting out from York the Day Two route through Bronte Country took in Silsden, Keighley, Haworth (where the cycled raced up the setts of the village's famous Main Street - pictured above) Stanbury, Oxenhope, Hebden Bridge, Ripponden, Huddersfield and Holmfirth, before ascending Holme Moss and on to Sheffield.

The day's racing was clearly an incredible success, and it has recently been announched by the event organisers that a self contained event called the "Tour de Yorkshire" cycle race is to take place in 2015.