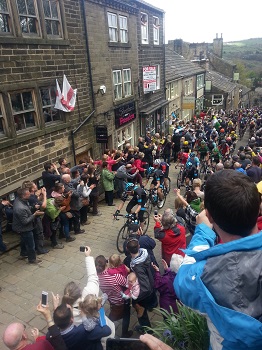 Following on from the success of the Grand Depart of the Tour de France in 2014 on Sunday 3rd May 2015 Stage Three of the inaugural "Tour de Yorkshire" cycling event came through the Bronte Country area as part of a challeging route which started in Wakefield and took in Holmfirth, Huddersfield and Hebden Bridge before arriving in Haworth, where the cyclists ascended the village's famous stone setted main street (pictured above) in scenes reminiscent of the Grand Depart which was held in Yorkshire the previous year.

From Haworth the race moved on through Oakworth and Goose Eye, and then on to Silsden before climbing out of the Aire Valley and on to Addingham and Ilkley in Lower Wharfedale before ending the day at a specially prepared arena at Roundhay Park in Leeds. 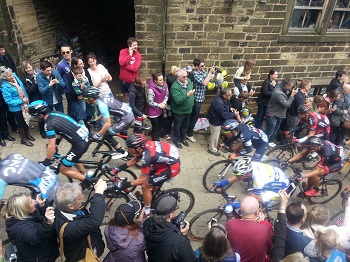 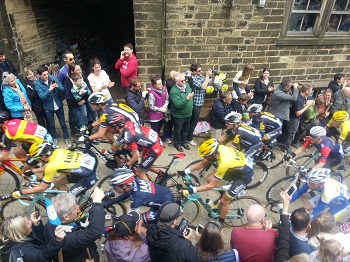 Just like the Grand Depart of the Tour de France the previous year the event was hailed a great success, with spectators turning out in their thousands to cheer on the cyclists along the route.

The Tour de Yorkshire is planned to be an annual event, and while the routes used in forthcoming years may well vary the challeging nature of the 2015 Stage Three intinerary should help consolidate the Bronte Country area's reputation as a cycling destination in its own right..