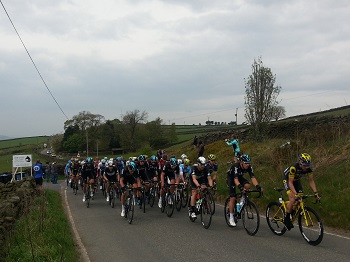 Starting out from City Park in the centre of Bradford the cyclists headed out to Lister Park and through Saltaire before heading out to Ilkley and lower Wharfedale and on to Skipton.

From there the peloton turned back southwards in to Bronte Country, passing though Keighley and Haworth in scenes reminiscent of the Tour de Yorkshire in 2015 and the Grand Depart of the Tour de France in 2014.

Taking in Holmfirth and the ascent of Holme Moss the race carried on in to South Yorkshire for a thrilling finale in Fox Valley at Stocksbridge near Sheffield.

The stage was won by Serge Pauwels riding for Dimension Data, who was also overall winner of the three day event.

For more information and news about cycling in the wider Yorkshire region please visit the Yorkshire cycling blog at www.cycleyorkshire.org